Whether you are looking to learn more about paediatric musculoskeletal problems, or are involved in the care of children, then PMM and PMM-Nursing will help you change your clinical practice for the better.

Poppy is 9 years old and has a 3 week history of pain in her legs and intermittent limp. Blood tests taken by her local doctor were normal. She deteriorated over a weekend with high fever, rash, sore throat and joint pain. She was admitted to her local hospital.

She was reviewed by haematology and a bone marrow was performed (reactive inflammatory changes only). After several days of antibiotics, she remained unwell with recurrent fever, rash and developed joint pain (hips, knees, hands and wrists, shoulders).

What is the likely diagnosis?

This is Systemic Onset JIA.

Repeat blood tests showed persistently raised acute phase reactants. She was treated with IV corticosteroids, daily over 3 days, improved rapidly and was discharged home on oral steroids to be reviewed after one week. She returned with more joint pain, recurrence of rash and fever. She had polyarthritis.

She was given further course of IV corticosteroids over 3 days and started on subcutaneous methotrexate weekly and discharged on oral steroids to be reviewed for blood tests in 4 weeks.

The family attended weekly to meet the nurse specialist and taught how to administer methotrexate at home. At her 4 week review she was well but had ongoing arthritis, intermittent rash but no fever. She was intolerant of methotrexate, even with antiemetics. After discussion with her family she was started on tocilizumab (IV infusion on the day unit) every fortnight and was able to continue lower dose of subcutaneous methotrexate. After 3 months she was well, in remission and had stopped her steroids. She attends the day unit for infusions of tocilizumab.

The chart shows the typical fever chart - spikes in the evening but normal in between.

A rash may appear at the times of fever. 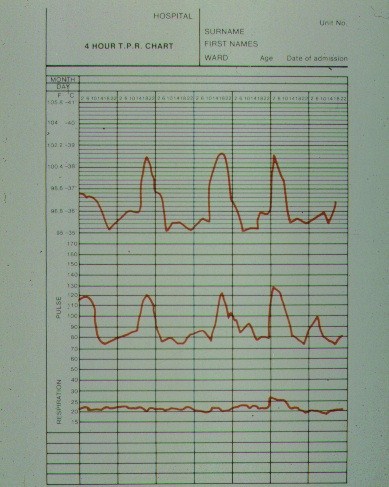 What are the key aspects in management ?