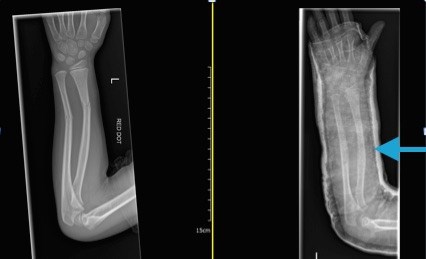 The configuration of the fracture pattern (angle formed by the imaginary lines along the fracture ends of two bones) is also described as:

Bones tend to give way before ligaments in pre-pubertal children, i.e., apophyseal injuries (piece of bone where the ligament is attached) are seen more in children and rarely in young adults. Paediatric bones remodel well after injuries; most diaphyseal (mid-shaft) fracture displacements (whether the bone ends are opposed [undisplaced] or otherwise [displaced]) and angulations (angles subtended by their long axes) are often managed non-operatively compared to adults i.e., the older the age, the lower the threshold to intervene to correct deformities by surgery. Children with fractures often have less deformity with time over several years - to near anatomical and full functional levels. The closer they are to skeletal maturity, the less is the remodelling potential.

In contrast, injuries of and around the growth plate (physis) are managed with lower threshold for surgical manipulation (mobilising the fracture ends under general anaesthetic) and reduction (opposing the fracture ends).  If there is a significant injury to a segment of physis, that segment stops growing, termed as growth arrest. The rest of the physis has a normal growth pattern resulting in a deformity. Growth arrest can be complete or partial. Complete growth arrest results in leg length discrepancy. Partial arrests can result in angular deformity or joint incongruity. Therefore surgically stopping the ‘normal’ growth of normal physis, at accurately calculated times, prevents say, an angular or a shortening deformity. There are skeletal predictive growth charts and tables available to predict the growth pattern and time the surgery.

Avulsion fractures: Tendons and ligaments are firmly attached to the thick outer layer of the bones called periosteum. Hence injuries involving resisted contraction with forces opposite to the direction of the pull of the muscle results in avulsion of the attached bony fragments. In adults, such mechanics would normally result in intra-substance injuries of tendons, ligaments and muscle tears.

The radiograph below shows an anterior cruciate ligament avulsion injury: The pre-operative sagittal CT image showing the physis and the avulsion injury - arrowed - that required internal fixation in an adolescent. Without surgery, malunion of the displaced epiphyseal fragment would have resulted in a non-functional ligament, restricting the patient’s knee stability and mobility. 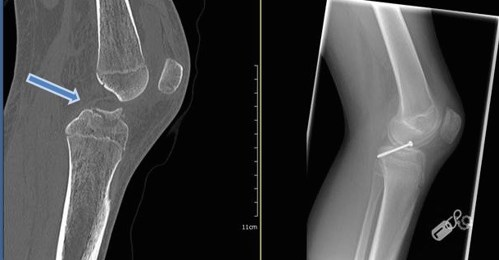 Stability of fractures is based on the site and the amount of apposition of the fractured bone ends. If the contact is <50% of the two surfaces in two planes (AP and lateral views), displaced physeal injuries and intra-articular fractures are considered unstable. The ability of a fracture to move after manipulation and reduction and cast application dictates the need for stabilisation.