Analgesia is important and often necessary to enable a child to be examined and further assessed.

There are two broad groups of NSAIDs—the older, traditional, non-selective NSAIDs (e.g., ibuprofen, naproxen, aspirin) that inhibit both COX-1 and COX-2 and the newer, selective COX-2 inhibitors that predominantly inhibit COX-2 (e.g., celecoxib). The clinical effects of NSAIDs depend largely on their selectivity for these enzymes. The non-selective group acting widely resulting in varying degrees of analgesic, anti-inflammatory and anti-pyretic and anti-platelet effects. The selective group has less gastro-intestinal tract side effects.

More information about pain relief is provided in PMM-Nursing.

The photograph below shows severe dental caries. Caries risk is increased with the regular ingestion of medicines that contain sugar-based syrups. Sugar-free alternatives are available and recommended. 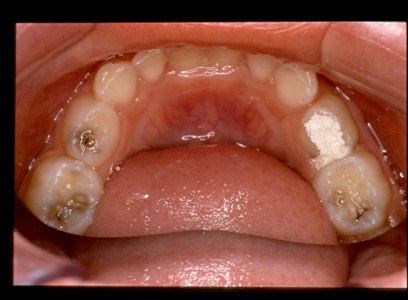