A 14-year old boy presents to his general practitioner accompanied by his mother. The boy has suffered from intermittent limp and left side thigh pain of various intensity for approximately 3 months. The symptoms have become worse after physical exercise such as football. At physical examination the doctor notices a slight limp, positive Trendelenburg sign on the left leg and decreased internal rotation of the left hip. The boy is overweight but not obese (BMI 27). He looks well and has no fever. His abdomen and inguinal canals are non-tender and appear normal.  The doctor suspects muscular problems and sends the boy to a physiotherapist who starts stretching the thigh muscles.

This is not an appropriate management. It is noteworthy that “sprains”, tightness and other muscle related conditions are actually rare in children.  In this case the doctor noticed increased internal rotation of the left hip and a positive Trendelenburg sign.

The diagnosis is Slipped Capital Femoral Epiphysis (SCFE), which affects approximately 0.5 in 1000 children. The appropriate action would have been to arrange an urgent radiograph of the hip (or pelvis) including frog-leg or lateral views.

The radiograph revealed a stable SCFE on the left hip (Radiograph below) and the patient was immediately referred to an orthopaedic clinic for surgical treatment.

Due to the significant risk of future contralateral slippage, both hips were operated with in-situ fixation (Radiograph below). 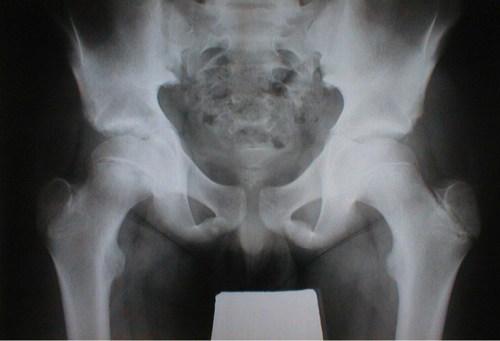