Slipped Upper / Capital Femoral Epiphysis (SUFE or SCFE) is the most common hip disease in adolescents, affecting approximately 0.5 in 1000 of young people age 9-15 years. In SUFE/SCFE, the proximal femoral growth plate becomes unstable, resulting in a gradual deformity between the epiphysis and the metaphysis of the femoral neck.

The child suffers from pain from the hip, thigh or knee that varies in intensity. In addition, the child often limps on the affected leg. In cases with predominant knee pain, the diagnosis will often be delayed as examination of the hip is not be included in the assessment.

It is therefore imperative to include assessment of the hip in children and adolescents with knee pain!  In patients with SUFE/SCFE there is decreased internal rotation and abduction compared to the contralateral hip. The leg may appear shortened and externally rotated, or may appear externally rotated on walking.

SUFE/SCFE can easily be missed as presentation may include vague symptoms such as vague knee pain or insidious limp. The majority occur unilaterally, but it can be bilateral in 20-40% of cases. Risk factors for SUFE/SCFE include male sex, being overweight, Down’s syndrome and hypothyroidism.

Delayed diagnosis can lead to a severe deformity with risk of early osteoarthritis. Complications include avascular necrosis, and chondrolysis (destruction and degeneration of the cartilage), which can lead to degenerative joint disease (osteoarthritis) in later life.

In most cases of SUFE/SCFE (>90%), the presentation can be described as ‘stable’ (the patient is able to walk, or can walk using aids, such as crutches). In the more rare cases of ‘unstable’ SUFE/SCFE, the patient has severe pain and is unable to walk at all. Those cases are associated with a worse prognosis due to a high risk of avascular necrosis of the femoral head.

If SCFE is suspected, urgent anterior posterior and 'frog leg' view hip radiographs should be requested.

Once confirmed, urgent orthopaedic assessment is required. The child should be given crutches or a wheelchair. SUFE/SCFE is treated surgically with the main purpose to prevent further slippage. This can be done either with a screw or a smooth nail that is inserted from the lateral aspect of the femur into the epiphysis of the femoral head. The benefits of using a smooth nail is that it permits longitudinal growth. This leads to improved remodelling of the proximal femur during the remaining growth. In severe slips, some paediatric orthopaedic surgeons advocate surgery with subcapital realignment; this is a technically demanding procedure that restores the anatomy but also includes a significant risk of iatrogenic avascular necrosis.

The photograph shows severe changes of SUFE/SCFE at the right hip. 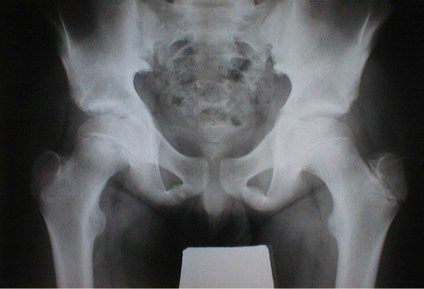