The potential for referred pain from the spine or pelvis (including non-musculoskeletal pathology such as hernia, testicular torsion, psoas abscess and appendicitis) should be considered.

The likelihood of cause and presentations varies by age-group. 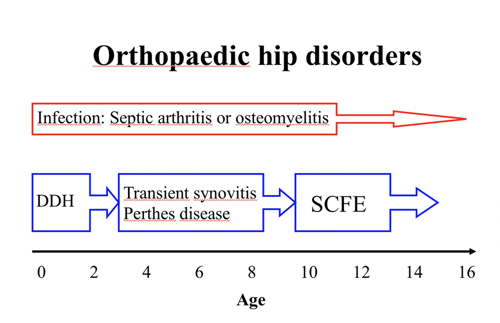 New onset of limp in a teenager should prompt concern about Slipped Upper [Capital] Femoral Epiphysis, whereas in an infant, a delayed presentation of Developmental Dysplasia of the Hip is more likely. The young school aged child should raise concern about Transient synovitis 'irritable hip' or Legg-Calve-Perthes disease.