In Perthes disease, the blood supply to the femoral epiphysis is interrupted, leading to avascular necrosis. The cause is unknown.  Following avascular necrosis, the bone softens and breaks down, then over the following months to years, the blood supply regrows, and the bone reforms and remodels. In some cases this leads to severe deformity of the femoral head, and early osteoarthritis. Perthes disease is more common in boys and tends to present between the ages of 4 and 8. The prognosis is better in younger children.

Children present with hip or knee pain, and/or limping. The limp may be of insidious onset, and worsen with exercise. It is bilateral in 10-15% of cases. On examination, classical features are of restricted internal rotation of the hip, and restricted abduction.

If Perthes is suspected, anterior and lateral hip radiographs should be requested. The most effective images are one Anterior Posterior (AP) image of the pelvis and one frog-leg view of the pelvis (lateral images of both hips) taken with gonad protection (as shown below).  The images below show right side Perthes disease in a 7 year old boy, illustrated by fragmentation of the femoral head and shortening of the femoral neck.

Radiographs may be normal during the first months after disease onset and in such cases MRI will give the diagnosis.

Treatment aims to maintain a good range of movement, control pain, and minimise any future deformities of the femoral head. Physiotherapy is very important, but in a small number of cases, surgery may be required.

It is important to bear in mind that Perthes disease extends over several years (4-6 years) and that it is the shape of the femoral head (round-good, flat-bad) at the final stage that decides the long-term prognosis. In general, those who present at an older age, and have more advanced changes, also have a worse prognosis with a high risk of developing early osteoarthritis. 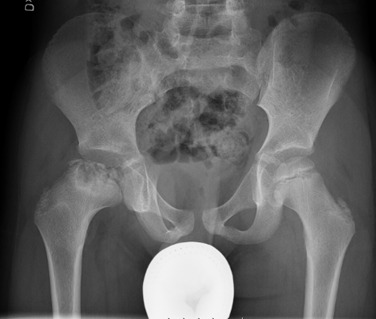